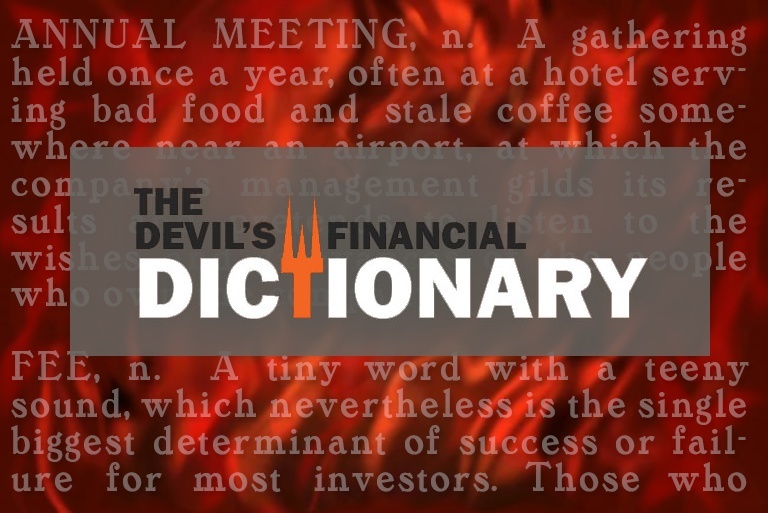 ASSET GATHERING, n.  The term that asset managers use, when no one is listening, to describe what they do. In plain English it means: grabbing all the money we can with both hands from as many customers as possible so we can earn more fees for less work.

BROKER, adj.  The comparative form of broke. Also, used as a noun, a person who buys and sells stocks, bonds, mutual funds, and other assets for people who are under the delusion that he is doing something other than guesswork.

MATURITY, n.  What all bonds have and what most bond traders lack.

COMPLIANCE, n.  The set of procedures by which a financial firm ensures that all its employees observe the letter of the law. … The spirit of the law, however, is enforced by the conscience department – which appears to be comparatively understaffed.

Lest you think Zweig only gives the financial community a hard time, he takes abundant aim at investors too:

INDIVIDUAL INVESTOR, n.  Someone who, without wise advice, is likely to ruin a small portfolio, generally $1 million or less.

INSTITUTIONAL INVESTOR, n.  Someone who, without wise advice, is likely to ruin a large portfolio, generally $10 million or more.

PAST PERFORMANCE IS NO GUARANTEE OF FUTURE RESULTS, n.a. The meaning of these words is a complete mystery, or so we must conclude from the behavior of investors.

Not to mention our government:

DODD-FRANK ACT, n.  A financial-regulation law, enacted in 2010, intended to prevent financial institutions from becoming “too big to fail.” Unfortunately, the Dodd-Frank Act didn’t prevent itself from being too long to read,  too complex to understand, and too convoluted to implement.

REGULATOR, n. A bureaucrat who attempts to stop rampaging elephants by brandishing feather-dusters at them. Also, a future employee of (or provider of services to) a bank, hedge fund, brokerage, or investment-management firm.

And a host of other suspects, including corporate America and the financial press:

ANNUAL MEETING, n.  A gathering held once a year, often at a hotel serving bad food and stale coffee somewhere near an airport, at which the company’s management gilds its results and pretends to listen to the wishes and grievances of the people who own the company.

FINANCIAL JOURNALIST, n.  Someone with deep and broad expertise in moving words around on a page or screen until they sound impressive regardless of whether they mean anything.

Basically, none of us is safe from Zweig’s sharp wit:

We encourage you to check out Zweig’s dictionary for yourself, as there is much to be learned about investing without it actually feeling like work. If you’re hankering for even more, we highly recommend his classic book “Your Money & Your Brain,” about the myriad financial mistakes that our brains trick us into making.

We’ll close with a couple of our favorite definitions from Zweig’s dictionary that we feel all investors should take to heart as they make their wary way in the world:

CERTAINTY, n.  A state of clarity and predictability in economic and geopolitical affairs that all investors say is indispensable — even though it doesn’t exist, never has, and never will.

FEE, n.  A tiny word with a teeny sound, which nevertheless is the single biggest determinant of success or failure for most investors. Those who keep fees as low as possible will, on average, earn the highest possible returns.

Sage Serendipity: After finding some humor in a few of the financial industry’s less admirable traits, we thought it would be worth sharing some uplifting news as well. According to a recent report from the Giving USA Foundation, charitable giving was on the rise as of 2013, especially from individual donors. What you do counts!